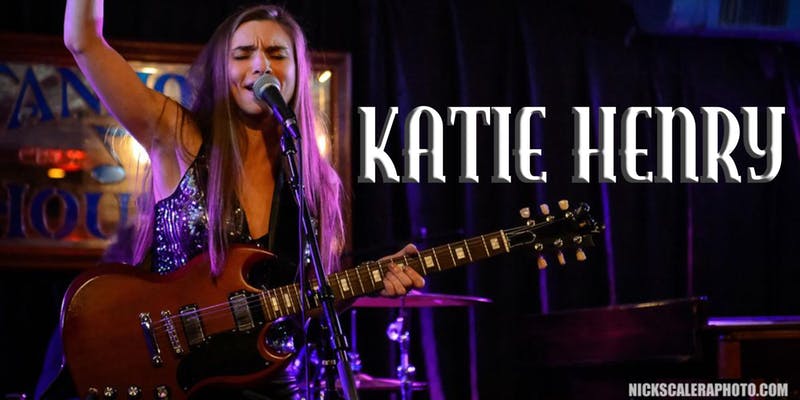 Described by audience members as deeply soulful and moving, Katie has been raising eyebrows in the music scene throughout the northeast. Her live performance is packed with highlights that feature her band of highly touted New Jersey players and showcase her catalogue of well crafted songs. Jim Hynes from Making A Scene Magazine writes, “Henry has a flair for songwriting that exceeds many blues artists. It’s a wide arc, one that encompasses roots, R&B, funk, pop, and rock.”

Singer/songwriter and multi instrumentalist Katie Henry has been absorbing the life-altering glory of rock and blues music since her parents first put needle to vinyl. From her musical upbringing in the mountains of North Jersey to cutting her teeth in the New York City circuit, Katie channels all of her experience into her own distinctive sound. Whether she is crafting lyrics and melodies, soloing on her Gibson SG guitar, tickling the keys of a Vintage Vibe, or belting out her favorite blues songs, Katie shows that her music has no limits.

The Shady Street Show Band is a sonic carnival. Beats deep in the groove combine with a wildly inventive low end as juke joint piano squares off against a screaming distorted organ. Two guitars dance in and out of rhythm and blues and rock and roll while the singers exchange words. His guttural growl compliments her sweet and soulful approach. The horn section tears right out of the heart of a prohibition era jazz orchestra.

Echoes of American Roots Music that inspired the band ring clear, but Shady Street stands on its own; thoughtful songwriting filtered through the showmanship of a traveling circus. Behold the birth of Big Top Soul.

LilyBella is an American pop/rock singer, musician, and performer. Her style draws from a variety of diverse influences. Above all, LilyBella prides herself on her songwriting and making a connection with her listeners.

$5 food & beverage minimum charged in cash at the gate for all guests under age 21; Voucher redeemable in restaurant